Two weeks ago, I revamped an Austro Daimler Vent Noir to a more upright position with bar ends instead of downtime shifters.  Using a Surly Open Bar -- it can fit bar end shifters! -- I use silver shifters to an Origin 8 camp-on cable stoppers at the down tube with Jagwire mickey adjuster barrels which continue over the top of the bottom bracket to the rear derailer.


Since converting the bike to use bar-ends, it took a noticeable amount of effort to shift to  larger cog on the rear and was always much faster to shift to smaller cogs.  I thought that this was an effect of widening the dropouts and using a 7 speed cluster with the old Shimano Crane derailer.  But to be frank, I didn't think much of it and decided to just ride it.  After a ride with a lot of climbing -- if you're local, through North Arlington along Nellie Custis and Military Road all the way to Glebe Road -- with the kids, I started having more trouble getting to the bigger cogs.  It deteriorated to the point that during the last mile or two, I could barely shift out of the smallest cog (13t) to the next larger one (15t).

Putting it on the stand, the cable lost tension such that I thought that the fastening bolt simply was too loose.  After re-tightening the cable with tension, however, I couldn't move the derailer at all.  I can pull a little cable but the resistance becomes very high.  However, I can move the derailer by hand.  Two videos below demonstrate this.

The housing from the shifter to the cable stop is new.  The housing on the rear, however, is old.  So my next thought is to put new housing there.  But the effect seemed so sudden and severe, that I thought to ask the greater cycling world whether there is something else I should consider.

Bill from the iBOB list correctly assessed and predicted the problem.  I had some slop in the housing leading to the downtube cable stop and used the wrong ferrule.  This resulted in the housing becoming "frayed" or as another person wrote, "herniated".

Posted by Invisible Hand at 1:19 PM No comments:

How to carry a trumpet?

My son plays trumpet at school.  Typically he rides his bike to the bus stop with a back pack but twice a week he must bring a trumpet with him.  Naturally adding a trumpet creates a small problem with how to carry everything.

Unfortunately, mounting certain racks and baskets faces some restrictions on the bike.

Note that he uses this bike for fun so a more "minimal" solution is attractive.

My first thought is that a porter/flat-top rack with a cargo net would work best.  He might even be able to put his backpack and trumpet on it since the total weight of both remains relatively light.  For a reasonable price, I noticed an Origin 8 front rack that attached to the front axle and fork crown.  But as other folks have noted, the overall width might be too wide for the quick release clamp. 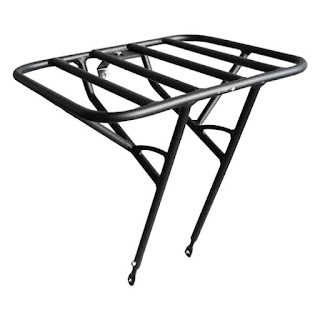 I've seen a handful of other options that would use p-clamps such as the Raidoverks Demiporteur rack or the Minoura Gamoh porter style racks available for the front or rear.

There seems to be a few options that all seem to have plusses and minuses including price.  Remember that this is a kid's bike and we should expect him to be somewhat careless with it.  Any experiences, thoughts or suggestions are welcome.

Posted by Invisible Hand at 7:15 AM 2 comments:

Using an old Bike Friday front rack on a tandem

Recently, I mounted an old Bike Friday New World Tourist front rack to our Bike Friday triplet and discovered that the lateral support bar was too short.  Thinking about it afterward, it makes complete sense since the tandem fork is beefier and accepts wider tires. 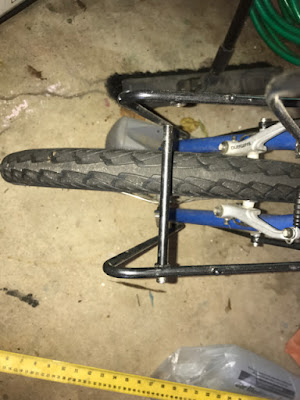 The picture is somewhat misleading since without the lateral support, the front of the rack angled toward the wheel.  But the appropriate support length is about 1 inch longer.

Unfortunately for me, Bike Friday has redesigned their front rack and no longer produces the appropriate length support.  My solution was to use two spacers and a longer M6 screws to bridge the gap. 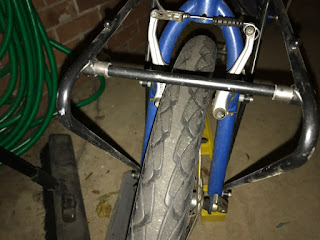 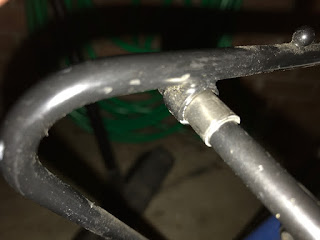 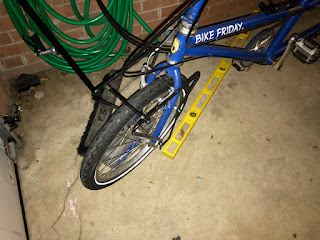 How skewed is the US Senate?

A recent article in the Economist recommends that the Senate fillibuster be repealed due to the low proportion of the population needed to block legislation.  In theory, as little as 11% of the population could be represented by the 41 senators needed to block anything except a budget.  A conversation with my bud PD led to the question that even though the Senate is skewed by design, how does the present Senate compare to the first one based on a census and would the Founding Fathers approve of today's circumstances?

Note that some of the difference above is due to the fewer states and the discrete nature of the voting.  Below is the cumulative population distribution against the proportion of US Senate representation for 1790 (red) and 2010 (blue).  Visually, one can see that the 2010 Senate is more skewed.  For kicks, the Gini coefficients for 1790 and 2010 are 39% and 50%, respectively.  I'm no historian, so someone else will have to address the question of what the Founding Fathers would think of today's circumstances ... or if what they would think matters.  More to the point of the original article, it should be clear that small population states have a much bigger influence in the Senate than in the past obstructing legislation.

Posted by Invisible Hand at 7:43 PM No comments:

Shimano and Tektro brake comparison ... or what models of v-brakes sit flush with the end of the brake boss stud?

During the process of switching from long pull to short pull v-brakes on a folding bike, I noticed a quirk between the Shimano and Tektro brakes with respect to mounting on the brake bosses.

Long story short, it appears that brake-boss-base -- or where the springs of the v-brakes mount -- is "too long" for the Shimano v-brakes.

A quick comparison between the two brakes reveals the Tektro spring portion of the brake is deeper than it's Shimano counterpart.  In fact, when you take into account that the entire Shimano brake is somewhat wider than the Tektro brake, the brake extends quite a bit past the end of the stud.

I gather from a few online discussions that the gap between the brake-boss-base and the brake is standard for some models and not an issue: The post is more than stiff enough to support the brake and the bearings or whatever that allow the brake to rotate are inside the brake rather than between the stud and brake.

The sad thing is that after learning all of this, I determined that these Shimano brakes will not work with the folding bike.  The front rack mounts onto the front of the brakes as well as to an eyelet.  Changing brakes would move the mounting points and make it more than a little difficult (impossible?) to fit the rack.

So does anyone know if a Tektro short pull v-brake -- say the Tektro RX5 -- sits flush with the end of the stud?  Are there other options?  Thanks.
Posted by Invisible Hand at 6:15 PM 2 comments:

The Onion nails a serious issue with spectacular satire.

How terrible are our prisons?  The Justice Department studied the issue and estimated that in 2008 there were 216,000 rape victims in US prisons suggesting that more than half of all rape victims are men.  Notice that it is a count of rape victims such that repeated rapes of the same victim is counted once.  The bi-partisan Commission on Safety and Abuse in America's Prisons describes the high level of overcrowding and violence in their 2006 report.

During this time of budget austerity pressures, people are finally noticing that incarcerating inmates is expensive.  In a state like California it annually costs $47,000 per inmate.  The average across states is a little more than $32,000.  Note that these are accounting costs that fail to capture lost work opportunities and time away from parenting and loved ones.

Naturally, we should support the Attorney General as he recommends lowering sentences for nonviolent drug offenders.  More broadly, we should consider whether it makes sense for us to pursue the expensive yet less effective strategy of incarcerating nonviolent inmates in inhumane environments for lengthy periods of time.
Posted by Invisible Hand at 7:10 PM No comments:

The speed of a vehicle and pedestrian mortality

The over four thousand pedestrians killed ever year from motor vehicle collisions have motivated the following graphic. 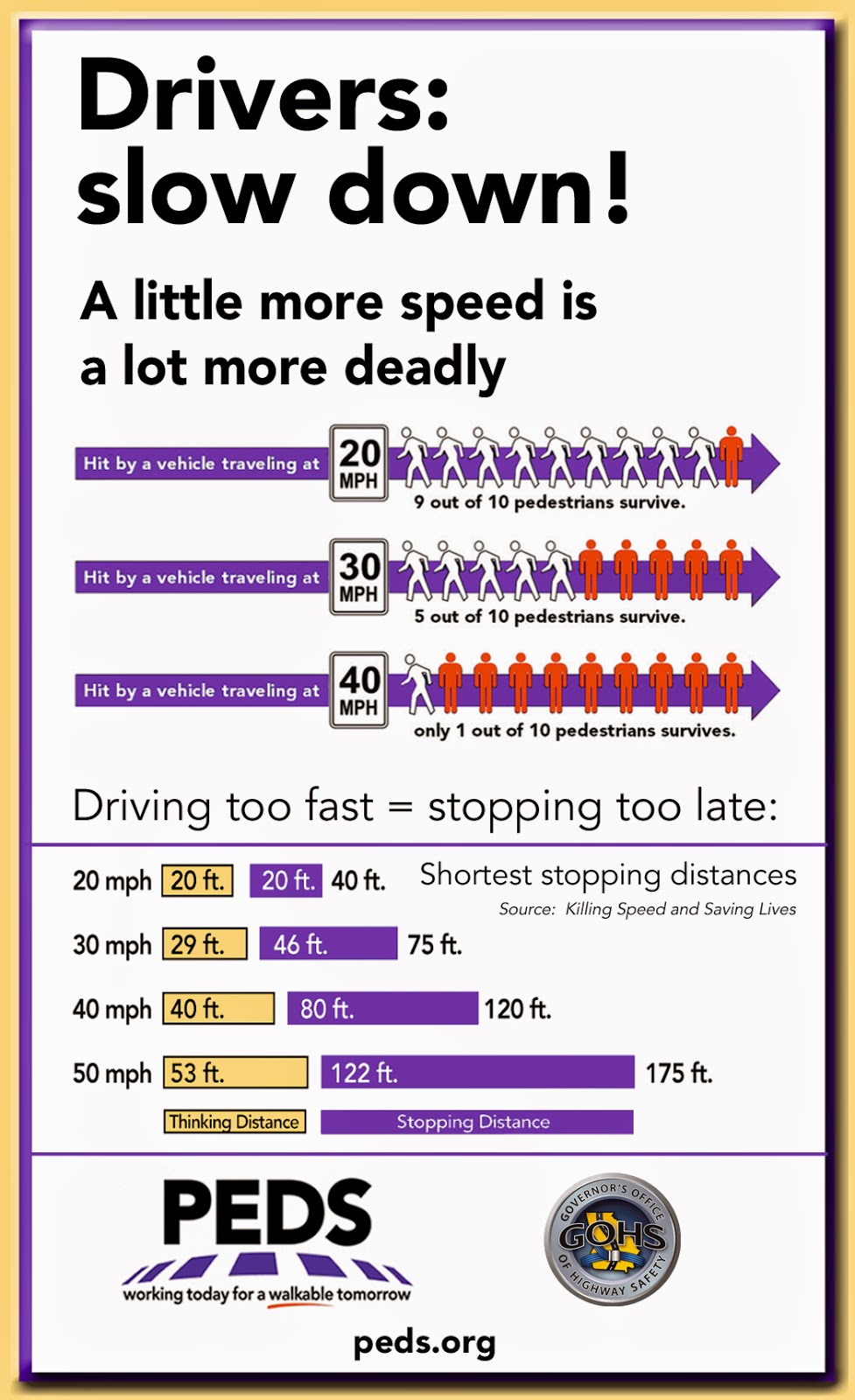 Naturally, we expect the likelihood of mortality to increase as the vehicle travels faster and physics suggests that it will be nonlinear.   But like anything else, we want to make decisions based on accurate information and understanding of risk.

These estimates originate from research using 1980s and earlier data more likely to report serious injuries.  From the abstract of a literature review published in 2011.


Without exceptions, papers written before 2000 were based on direct analyses of data that had a large bias towards severe and fatal injuries. The consequence was to overestimate the fatality risks. We also found more recent research based on less biased data or adjusted for bias. While still showing a steep increase of risk with impact speed, these later papers provided substantially lower risk estimates than had been previously reported.

Clearly, estimates that correct for the bias or use less biased data are much lower than those suggested by the popular graphic.  Mind you, it's still the case that the likelihood of mortality rapidly increases as vehicle speed increases and that serious injuries are important too.

Broadly speaking, as a person who advocates transportation networks with strong walking and bicycling options, relying on bad or biased estimates when better options are readily available to make our points is a terrible strategy.  Besides being ethically questionable, it (1) makes advocates look naive, (2) sets expectations too high, and (3) leads to poor decision-making.  For example, suppose we believe the graphic such that a pedestrian struck by a vehicle traveling at 40 mph is almost certainly going to die.  One might reasonably conclude that there is no point in traffic calming a 50 mph arterial since there is nothing to be gained until you get below 40 mph.  However,  that's not the case based on the more robust estimates.

We can see the bias in this graph by Rosen.  You can see how the risk curves are dramatically shifted left when using the biased data. 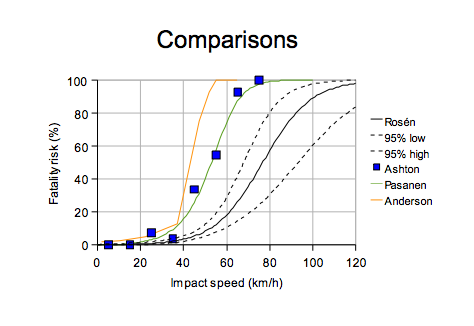 Posted by Invisible Hand at 8:25 AM No comments: